This is Scientific American's 60-second Science, I'm Christopher Intagliata.
In the summer of 2015, a strange delivery arrived in Munich, Germany: 25 boxes of still-frozen snow—sent all the way from Antarctica. The reason for shipping 1,100 pounds of snow halfway around the world? Scientists were hunting for interstellar dust—which might hold clues about our place in the universe.
So first scientists melted the snow and then filtered it for fine particles. Analyzing the remaining dust with mass spectrometry, they found traces of the isotope iron-60, which is primarily produced in two ways: by exploding supernovas or by cosmic rays zapping interplanetary dust. But it's also produced in nuclear reactions here on Earth, by bombs or nuclear reactors.
So to determine how much of the stuff was truly interstellar—from beyond our solar system—the researchers used other isotopic clues to screen out quantities of iron-60 produced by nuclear reactions and cosmic rays. And they still had some iron-60 left over to a﻿ccount for—the stuff produced by supernovas. 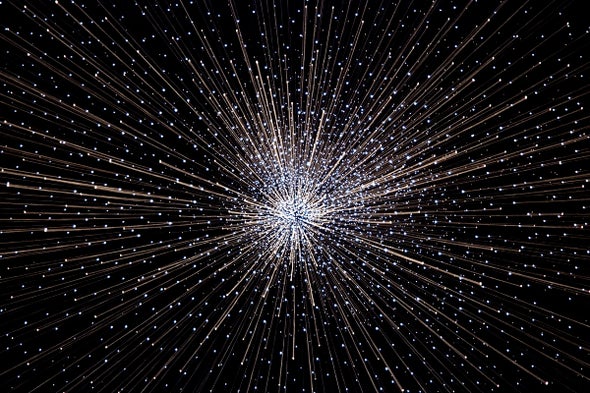 "Just by looking at something which is on our own planet to learn something which is so far away and happened so many millions of years ago—I mean, that's pretty amazing. And that's why I really like this work." Dominik Koll, an experimental nuclear physicist at the Australian National University. His team reported the results in the journal Physical Review Letters.
Koll says this iron-60 might be showering down on us from the Local Interstellar Cloud, the patch of space the solar system is moving through right now. And if the cloud contains material produced by supernovas, Koll says, it could be the ancient remnants of exploding stars—a clue to the structure and formation of the universe. Luckily, we can investigate it all by hunting for dust, right here on spaceship Earth.
Thanks for listening for Scientific American — 60-Second Science. I'm Christopher Intagliata.